Skip to content
Search
Close
This post follows on from an earlier post: “So, ummm, I own a Motor Racing team“.
I decided to look into setting up an amateur motor racing team in the Spring of 2018. It’s something I always wanted to do but I always thought it would be very expensive. I’ve previously setup a football club and a few different business & it’s always the “behind the scenes” stuff that interests me most.
When I discovered that a contact of mine (JB Farrell) always wanted to try Motor Racing as a driver, we agreed to look into it.
After making contact with an existing grass roots Race Team / Engineer (SM Racing), and finding out that the cost per Season is much less expensive that I had anticipated, I decided to give it some serious thought. The full cost for a season at the ‘entry level’ can be anywhere from €5k to €15k, depending on whether you have a car already and on how you do it (e.g whether you have Race Mechanic knowledge or need to hire Engineering expertise etc).
So, we decided to do a test to see if either of us could actually drive a race car! We rented the track at Kirkistown N.I. (basically had it almost to ourselves for most of a Saturday), rented a car and hired the SM Racing team and their existing car. This was in Nov. 2018 on a freezing cold Saturday. This is a ‘piss take’ trailer of that Test: https://youtu.be/6jT1Zjb82YY 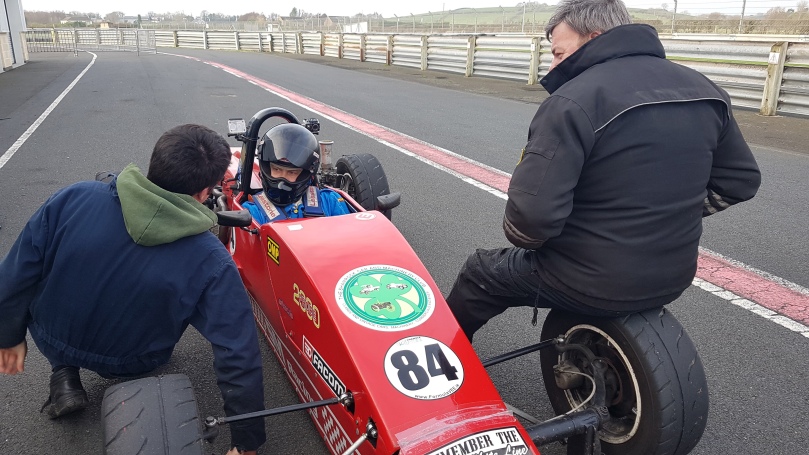 After the Test, it was clear that JB was a bit of a natural. Within a few laps he was improving to the point where his Lap Times were only about 1.5 seconds off the Lap Record.
In the end, we agreed a deal with the SM Racing Team, whereby they would build a brand new car for us on the basis that we would ‘rent’ it for the 2019 season. Instead of paying the build cost of the car (because we had no idea if we would be any good or would still like Motor Racing after a season), we would rent the car but also ‘hire’ the SM Racing team to provide Engineering and all associated supports and costs (since we don’t know anything about this stuff!). The season cost was pegged at around €15k in total. We also had first refusal to buy the car (or re-rent it again) if we decide to carry on in 2020.
CiCoDa agreed to cover half the season costs, in return for title sponsorship and the driver is responsible for the other half. The driver also had one-off costs of his own (Race Suit, License, Helmet, Equipment etc) totaling around €3k to €4k, I think.
So, a brand new car was built over the Winter.

This is it on day one:  https://youtu.be/IwYnnqtFQVg

So, we took our new car on another Test day in March 2019 – again renting the track at Kirkistown again. We both drove our new car (in my case, after a heavy downpour, which made the track very wet and propoer scaryfun).
This is some footage of the new car’s first “shakedown”: https://youtu.be/LcYxZRlRtlM

This is my Blog post just before we started the season: https://ronhealy.wordpress.com/2019/03/30/cicoda-racing/
This is a ‘piss-take’ trailer we made: https://youtu.be/vXACEEr0O3M
And another one from during the season: https://youtu.be/3-bMF6XPDgc
Like any self-respecting(!?) Motor Racing team, there’s also front-facing and rear-facing onboard cameras that record footage from every race – useful for checking when the Driver blames someone else for a crash. Also (vaguely!) interesting for the Track nerds among us – but I won’t bother sharing those links

It’s been a tough season so far for JB, full of action, as you can see from this picture: 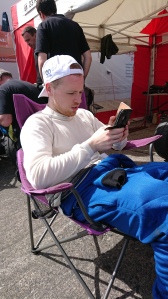 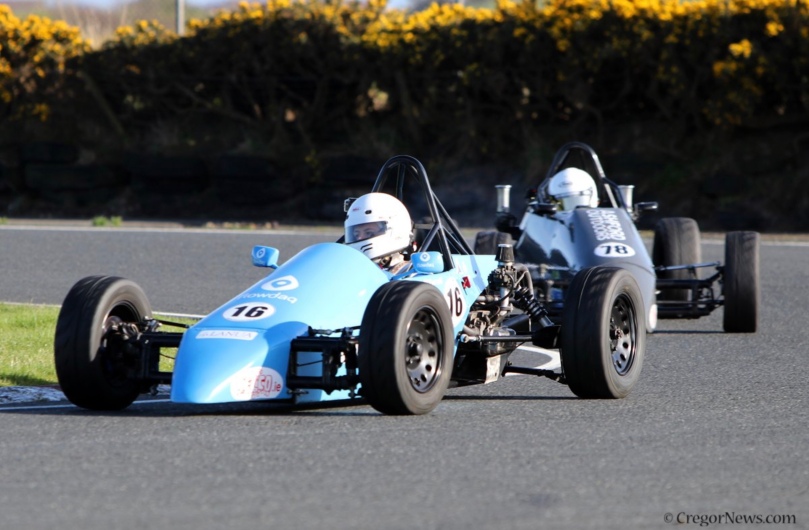 The season is now near the sharp end. Three races to go (2 at Mondello on 14 & 15 Sept, 1 in N.I. on weekend of 27 Sept). We’re currently leading the Class Championship (for Rookies) and 5th overall in the National Championship – much better than I expected. The driver turned out to be a bit of a natural (he had never driven in races of any kind before so that was a ‘known unknown’). 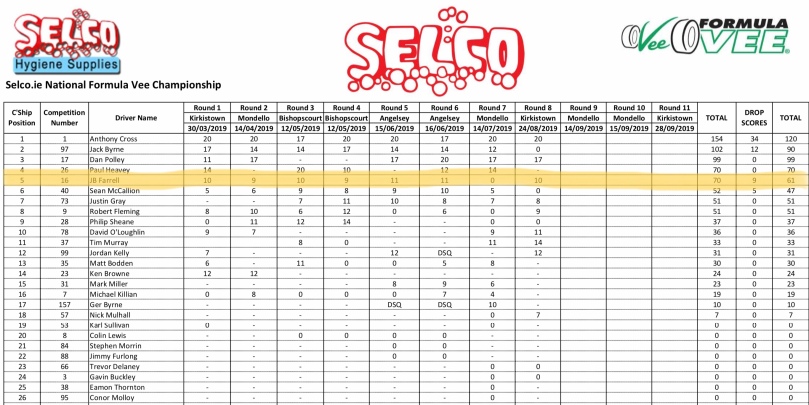